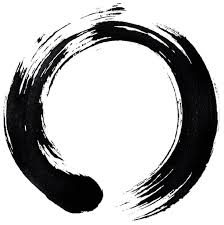 Ma-Tsu: Why have you come here ?

Ma-Tsu: Why are you ignoring your own treasure-house and walking around outside looking for it ?

Pupil: What is my own treasure-house ?

Ma-Tsu: That which is asking the question is your own treasure-house.

Later, in the kitchen...

Ma-Tsu: What are you doing ?

Pupil: I watch him. When he tries to enter the grass I grab his nostrils and pull him away.

All the Buddhas and all sentient beings are nothing but the One Mind beside which nothing exists. This Mind, which is without beginning, is unborn (not in the sense of eternity, for this allows contrast with its opposite; but unborn in the sense that it belongs to no categories admitting of alteration or antithesis) and indestructible. It is not green nor yellow, and has neither form nor appearance. It does not belong to the categories of things which exist or do not exist nor can it be thought of in terms of new or old. It is neither long nor short, big nor small, for it transcends all limits, measures, names, traces, and comparisons. It is that which you see before you - begin to reason about it and you at once fall into error. It is like the boundless void which cannot be fathomed or measured.

The One Mind alone is the Buddha, and there is no distinction between the Buddha and sentient things, but that sentient beings are attached to forms and so seek externally for Buddhahood. By their very seeking they lose it, for that is using the Buddha to seek for the Buddha and using mind to grasp Mind. Even though they do their utmost for a full aeon, they will not be able to attain to it.

I was still a young man when I came to discover the principle of the Unborn and its relation to thought. I began to tell others about it. What we call a "thought" is something that has already fallen one or more removes from the living reality of the Unborn. If you priests would just live in the Unborn, there wouldn't be anything for me to tell you about it, and you wouldn't be here listening to me.

Because of the unbornness and marvelous illuminative power inherent in the Buddha-mind, it readily reflects all things that come along and transforms itself into them, thus turning the Buddha-mind into thought. I'm going to tell those in the lay audience all about this now. As I do, I want the priests to listen along too.

Not a single one of you people at this meeting is unenlightened. Right now, you're all sitting before me as Buddhas. Each of you received the Buddha-mind from your mothers when you were born, and nothing else. This inherited Buddha-mind is beyond any doubt unborn, with a marvelously bright illuminative wisdom.

In the Unborn, all things are perfectly resolved. I can give you proof that they are. While you're facing me listening to me speak like this, if a crow cawed, or a sparrow chirped, or some other sound occurred somewhere behind you, you would have no difficulty knowing it was a crow or a sparrow, or whatever, even without giving a thought to listening to it, because you were listening by means of the Unborn.

If anyone confirms that this unborn, illuminative wisdom is in fact the Buddha-mind and straight away lives, as he is, in the Buddha-mind, he becomes at that moment a living Tathagata, and he remains one for infinite kalpas in the future. Once he has confirmed it, he lives from then on in the mind of all the Buddhas, which is the reason the sect I belong to has sometimes been called the "Buddha-mind" sect.

While you face this way listening to me now, if a sparrow chirps behind you, you don't mistake it for a crow; you don't mistake the sounds of a bell for that of a drum, or hear a man's voice and take it for a woman's, or take an adult's voice for a child's. You hear and distinguish those different sounds, without making a single mistake, by virtue of the marvelous working of illuminative wisdom. This is the proof that the Buddha-mind is unborn and wonderfully illuminating.

None of you could say that you heard the sounds because you had made up your minds to hear them beforehand. If you did, you wouldn't be telling the truth. All of you are looking this way intent upon hearing me. You're concentrating singlemindedly on listening. There's no thought in any of your minds to hear the sounds or noises that might occur behind you. You are able to hear and distinguish sounds when they do occur without consciously intending to hear them because you're listening by means of the unborn Buddha-mind.

When people are firmly convinced that the Budha-mind is unborn and wonderfully illuminating and live in it, they're living Buddhas and living Tathagatas from then on. "Buddha" too, is just a name, arising after the fact. It's only the skin and shell. When you say "Buddha," you're already two or more removes from the place of the Unborn.

If you live in the Unborn, then there's no longer any need to speak about "nonextinction" or "undying." It would be a waste of time. So I always talk about the "Unborn," never about the "Undying." There can be no death for what was never born, so if it is unborn, it is obviously undying. There's no need to say it, is there?

You can find the expression"unborn, undying" here and there in Buddha's sutras and in the recorded sayings of the Zen masters. But there was never until now, any proof or confirmation given of the Unborn.

When you are unborn, you're at the source of all things. The unborn Buddha-mind is where the Buddhas of the past all attained their realization and where future Buddhas will all attain theirs. Although we're now in the Dharma's latter days, if a single person lives in the Unborn, the right Dharma flourishes in the world. There's no doubt about it.

Upon confirming yourself in the Unborn, you acquire the ability to see from the place of that confirmation straight into the hearts of others. The name the Zen school is sometimes given, the "Clear-eyed" sect, stems from this. There, at the place of confirmation, the Buddha's Dharma is fully achieved. Once the eye that can see others as they are opens in you, you can regard yourself as having fully achieved the Dharma, because wherever you are becomes a place of total realization. When you reach that place, no matter who you are, you are the true successor to my Dharma.

A certain priest has said, "All you do is repeat the same things day after day. You ought to give your listeners a change. Their minds will be more receptive if you throw in some stories about the Zen masters of the past."

Dull-witted as I am, I think if I put my mind to it, I could probably remember a couple of anecdotes to tell people. But that would be like feeding them poison. I don't want to do that.

I never cite the Buddha's words or the words of Zen patriarchs when I teach. All I do is comment directly on people themselves. That takes care of everything. I don't have to quote other people. So you won't find me saying anything about either the "Buddha Dharma" or the "Zen Dharma."

I don't have to, when I can clear everything up for you by commenting directly on you and your personal concerns right here and now. I've no reason to preach about "Buddhism" or "Zen."

You're all intelligent people here. It's only your ignorance of the Buddha-mind that makes you go on transforming it into a hungry ghost, fighting spirit, or animal. You turn it into this and into that, into all manner of things, and then you become those things. Once you have, once you've become an animal, for example, then even when the truth is spoken to you, it doesn't get through to you. Or, supposing it does; since you didn't retain it even when you were a human being, you certainly won't have the intelligence as an animal to keep it in your mind.

This happens to everyone when, through a single thought, they let the Buddha-mind slip away from them. So you can see that it's a very serious matter indeed. Therefore, you must thoroughly understand about not transforming the Buddha-mind into other things. As I told you before, not a single one of you in attendance here today is an unenlightened person. You're a gathering of unborn Buddha-minds. If anyone thinks, "No, I'm not. I'm not enlightened," I want him to step forward. Tell me: What is it that makes a person unenlightened?

In fact, there are no unenlightened people here. Nonetheless, when you get up and begin to file out of the hall, you might bump into someone in front of you as you cross over the threshold. When you go home, your husband, son, daugher-in-law or someone else may say or do something that displeases you.

If something like that happens, and you grasp onto it and begin to fret over it, sending the blood to your head, raising up your horns, and falling into illlusion because of your self-partiality, the Buddha-mind turns willy-nilly into a fighting spirit. Until you transform it, you live just as you are in the unborn Buddha-mind; you aren't deluded or unenlightened. The moment you do turn it into something else, you become an ignorant, deluded person. All illusions work the same way. By getting upset and favoring yourself you turn your Buddha-mind into a fighting spirit—and fall into a deluded existence of your own making.

So whatever anyone else may do or say, whatever happens, leave things as they are. Don't worry yourself over them and don't side with yourself. Just stay as you are, right in the Buddha-mind, and don't change it into anything else. If you do that, illusions don't occur and you live constantly in the unborn mind. You're a living, breathing, firmly established Buddha. Don't you see? You have an incalculable treasure right at hand.