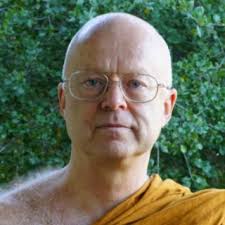 Ṭhānissaro Bhikkhu is an American Buddhist monk. Belonging to the Thai Forest Tradition, for 22 years he studied under the forest master Ajahn Fuang Jotiko (himself a student of Ajahn Lee). Since 1993 he has served as abbot of the Metta Forest Monastery in San Diego County, California — the first monastery in the Thai Forest Tradition in the US — which he cofounded with Ajahn Suwat Suvaco.

Ṭhānissaro Bhikkhu is perhaps best known for his translations of the Dhammapada and the Sutta Pitaka - almost 1000 suttas in all - providing the majority of the sutta translations for the reference website Access to Insight, as well as for his translations from the dhamma talks of the Thai forest ajahns. He has also authored several dhamma-related works of his own, and has compiled study-guides of his Pali translations.