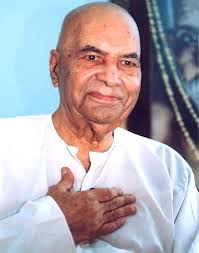 You Can Be Free

Maya - The Illusion of Reality

H. W. L. Poonja (Papaji) was born in Gujranwalla, in western Punjab, now in Pakistan, in a family of Saraswat Brahmins. His mother was the sister of Swami Rama Tirtha.

At the age of eight he experienced an unusual state of consciousness:

The experience was so overwhelming it had effectively paralysed my ability to respond to any external stimuli. For about an hour they tried everything they could think of to bring me back to a normal state of consciousness, but all their attempts failed.

He was persuaded by his mother that he could regain this experience by devotion to the Hindu god Krishna, and so he gave himself over to this and began to have visions of Krishna.

As an adult he led a normal life: he married, raised two children and joined the British army, while secretly his love for Krishna and his visions continued. He became obsessed with a longing to have the experience of seeing Krishna all the time. He continuously repeated Krishna's name (japa) and traveled throughout India asking sages if they could deliver the ability to produce the darshan of Krishna at will.

After all his attempts had failed he returned to his family in Lyallpur. A sadhu appeared at the door soon after and Poonja asked him the question he had asked swamis throughout the country: "Can you show me God? If not, do you know of anyone who can?" The sadhu told him that there was a person, Ramana Maharshi, who could show him God and explained how to find Ramana Maharshi at Tiruvannamalai in southern India. At the earliest opportunity, Poonjaji travelled to Tiruvannamalai to meet the sage Ramana Maharshi at Ramanashramam at Arunachala. This happened in 1944 when Poonja was thirty-one.

However, rather than giving another vision of God, Ramana pointed him in the direction of his own self:

I cannot show you God or enable you to see God because God is not an object that can be seen. God is the subject. He is the seer. Don't concern yourself with objects that can be seen. Find out who the seer is.

Poonja under Ramana's gaze became aware of the spiritual Heart, which he felt was opening, though he was not impressed with the advice. Poonja continued his devotion, having many visions of Hindu Gods. He was not yet convinced of the value of the Advaita Vedanta philosophy which Ramana was known for but was attracted to him nonetheless. When he had a vision of Ramana telling him that Krishna devotion was the only truth, Poonja returned to Ramanasramam and asked Ramana if he had indeed appeared before him. Though Ramana would not respond to his question verbally, while Poonja was waiting for an answer, a group of devotees arrived and gave Ramana a picture of Krishna. Ramana, looking at Krishna, wept so that Poonja became convinced that Ramana was a secret bhakta himself.

He found that he could no longer bring his mind to think of God, do japa or any other spiritual practice. He asked Ramana for help and was told that this was not a problem, that all his practice had carried him to this moment and it could be left behind now because it had served its purpose. When telling Ramana about the story of his search of the Self.

Then he looked at me intently. I could feel that my whole body and mind were being washed with waves of purity. They were being purified by his silent gaze. I could feel him looking intently into my Heart. Under that spellbinding gaze I felt every atom of my body being purified. It was as if a new body were being created for me. A process of transformation was going on—the old body was dying, atom by atom, and a new body was being created in its place. Then, suddenly, I understood. I knew that this man who had spoken to me was, in reality, what I already was, what I had always been. There was a sudden impact of recognition as I became aware of the Self.

Poonja recognised this as the same state he experienced when he was eight years old, but this time it was permanent.

After his transformation he stayed in southern India until 1947, when during the partition of India, despite Poonjaji's fierce longing to stay with his master, Ramana sent him to his old home in the Punjab (then in the new country of Pakistan) to bring his family to the safety of Lucknow, India. Ramana's last words to him were: “I am with you wherever you go.”

After this, Poonjaji met two other men "who convinced me that they had attained full and complete Self-realisation.", a Muslim Pir and an unknown sadhu whom he met by the side of a road in Karnataka.

In the following years H.W.L Poonja earned money to support his family, meeting with seekers and sharing satsangs. In 1953 he met Henri Le Saux, also known as Swami Abhishiktananda, who wrote many books on Advaita Vedanta and Christianity. Although not a disciple of his, the two formed a spiritual friendship and Swami Abhishiktananda wrote about their meetings and correspondences in his diary. In the late 1960s H.W.L Poonja formed a new family with his Belgian disciple, Ganga Mira and their daughter, Mukti. In 1966 he retired and spent a lot of time in the Himalayan foothills.

Poonjaji later settled in Lucknow where he received visitors from all around the world. Some well-known students are Mooji, Gangaji, Arjuna Ardagh, Catherine Ingram, Ganga Mira, Isaac Shapiro, Madhukarji, Sam Harris, Dolano, and Andrew Cohen, who later distanced himself from Poonja. David Godman moved to Lucknow in 1992, and stayed with him till 1997, and soon became his biographer, in the following years edited and published a number of books on him, including, Papaji Interviews, an anthology of interviews, and Nothing Ever Happened, a three volume 1,200-page biography.